Giving credit where credit is due isn’t exactly one of the fashion industry’s strong suits. On occasion designers may reference another designer that served as influence (Marc Jacobs has regularly cited peers such as Martin Margiela and Rei Kawakubo of Comme des Garçons). After covering jewelry for over thirteen years, rarely if, ever was influenced from another designer cited. At a recent meeting with Betony Vernon, a maker of high-end objects of pleasure and jewelry designer whose work features studs and spikes, it was clear whose influence has been pulsing through jewelry for the last few years. Designers such as Eddie Borgo and Riccardo Tisci have knowingly or not, been guided by her concepts.

Vernon’s philosophy of jewelry that interchanges and has a purpose beyond just adorning the body but also pleasing the body, started 25 years ago. The pleasure-minded designs proved to be too risqué for even seemingly open-minded retailers of the fashion world, so Vernon had to pioneer a path delicately crafting the message about her brand which could easily be misconstrued. Body-chains slash necklaces, choker slash collars, rings slash erogenous zone stimulators and other objects used during intercourse were hard pressed to earn a spot in the display cases of tony department stores. To get her “sado-chic” pieces of jewelry to market she did so by mainly building up a private clientele by word of mouth in the pre-internet era. “At the time, it wasn’t really accepted that a sexual object could also be beautiful.” After the events of 9/11 Vernon shifted her design mission and dropped the more “mainstream” pieces of her jewelry and decided to focus solely on the pieces meant for erotic stimulation.

Vernon also recognized that she was going to have to teach the use of her wares that were easily classified as S & M tools. She became an erotic educator so to speak holding didactic salons at Soho House London and at Coco de Mer, a female pleasure shop in London that according to the Virginia native was “pioneering in that it was chic and not in a dangerous part of town.” Reportedly, Fifty Shades of Grey author E.L. James regularly attended the classes. The salons ultimately led to her book which she crafted over the course of five years called “The Boudoir Bible” becoming the only textbook that Rizzoli has published to date.

Coinciding with her 25th year in business, her greatest creation to date, The Boudoir Box, will also be featured in an upcoming museum exhibit called “Medusa” at the Musèe d’Art Moderne that questions our relationship to jewelry both conceptually and physically. “It took me a moment to say yes to the exhibit but I decided I was ready to bring my work into the light” said Vernon who had shown other works in the Triennale di Milano and Biennale Venice. This is the first time the box will be on display for the public; it was shot by L.A.-based photographer Jeff Burton along with Vernon in the Turin-based house of Carlo Mollino, the mysterious Italian architect who left behind a secret stash of Polaroids featuring women in erotic poses. This is the first time they have been published.

“MY CLIENTS ARE SOPHISTICATED AND THEY INVEST IN THEIR SEXUAL HEALTH”

Originally Vernon used the box to house her selection of sexual wares that she carried to in-person client meetings, sort of like the Avon lady calling but only for high-end pleasure objects. It houses over 30 items such as ostrich feather ticklers and petting rings designed for mental clarity and focus during sexual play. Other objects include dilettos; vaginal and anal tools used as pre-act preparation, as well as clamps and leather lariat chokers. One key philosophy that motivated her designs was also the quality of objects meant to be inserted into various erogenous zone orifices. “My clients are sophisticated and they invest in their sexual health” explaining the reasoning behind her use of sterling silver and 18K gold. Her custom designs have also helped clients with scars and/or amputees like Amy Mullins to both decorate and disguise injury.

Vernon is hyper-aware of her ability to be mislabeled and in fact, supplies journalists such as myself with a list of do’s and don’ts when it comes to verbiage. Even in matters of communications, Vernon’s line of work relies heavily on trust. Upon visiting Vernon’s atelier Eden, which opened in late 2016 in the 4th arrondisement in Paris to interview her, about twenty minutes into it she felt that I could be shown the private room downstairs.

VERNON IS HYPER-AWARE OF HER ABILITY TO BE MISLABELED

It does not surprise me that I was deemed someone who got it, but for the record my foray into a “lifestyle” doesn’t expand much beyond my penchant for wearing leather and spikes. (Though this one time during my 1980’s club-kid heyday, I caused quite a ruckus at an S&M club called the Vault that sat under the current space of Dos Caminos Meatpacking. Quite inebriated, I was along for the ride with friends and slumped over a barstool. When I looked up I was surrounded by a group of men looking for some sort of punishment. I found slinging insults at them to come naturally and apparently, I was good at it because the manager had to break it up at some point. Ah the path less travelled.)

“I’M NOT ABOUT PAIN OR TORTURE. I’M INTO PLEASURE"

I’ll admit I was a tad apprehensive as we slinked down the circular stairs to her “cabinet de curiosité” as Vernon refers to it. But rather than being shocked I was amazed at the chicest romp room I had ever seen. On display was the kept-under-wraps until now Boudoir Box; a bust mannequin form modelled after Dita Von Teese’s shape while being corseted by the famous Mr. Pearl; a leather equestrian “sex’ chair designed by Mark Brazier-Jones that resembled a gymnastics pommel horse. A large leather sofa and exposed brick wall with a gas fireplace housed between polished stainless steel cabinets that act as mirrors gave it the feeling of a super-stylish suburban media room. Not a dangerous scary place at all. Vernon’s mantra is about shedding light onto the oft-tabooed subject of sex. “I’m not about pain or torture. I’m into pleasure; I mean the clitoris serves no other purpose than to bring pleasure.” Goal achieved Betony Vernon. 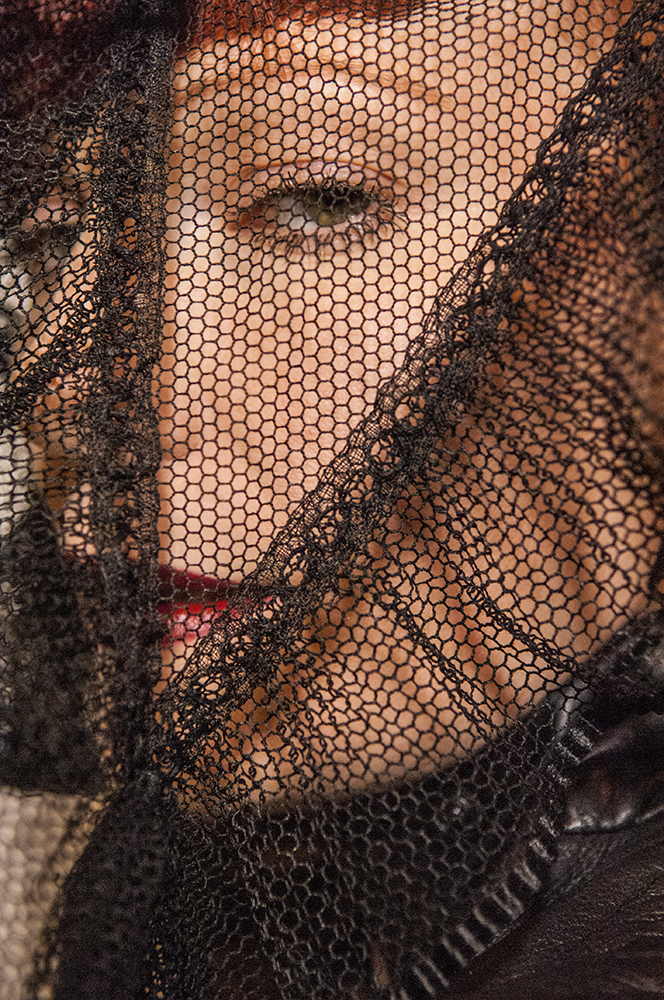